The meaning of decadence is layered in these rich and creamy Caramel Apple Mini Cheesecakes. They have all the taste you love in a classic cheesecake with a graham cracker crust elevated by warm cinnamon caramel apple pie filling. And they are a single-serving mini apple cheesecake recipe, making them the perfect fall dessert for large and small parties, including your Thanksgiving dinner.

I really cannot say enough about these little dreamy mini caramel apple cheesecakes. They are an easy recipe to satisfy your sweet tooth with some store-bought ingredients and other portions made from scratch. You just must try them finished off with a fresh piping of whipped cream and an extra drizzle of caramel topping.

This time of year, I can't help but dream of cozy new desserts and all the holiday planning ahead. That is why I always try to create unique spins on classic favorite desserts. A tried-and-true recipe favorite is my Caramel Pumpkin Spice Crunch Cakes.

But don't stop at desserts, when fall flavor lovers adore Sweet Dijon Pecan Baked Brie Bites as a new appetizer to serve at a Thanksgiving gathering.

Why We Love This Recipe!

Layers of crust, elevated apple filling, and rich cheesecake form the multi-layers of this complex and easy-to-make apple cheesecake dessert. Then when you add a beautifully piped whipped cream topping and more caramel drizzle- you not only have a decadent dessert, but it makes a stunning presentation of golden delicious mini desserts!

✱ Be sure to see the recipe card below for exact ingredients and instructions!

Start by heating the oven to temp and ready your muffin pan. Line the tin with cupcake liners or spray each muffin cup with cooking spray. No cooking spray? That is okay; use shortening or butter to grease each muffin cup. Then set the tin aside and get ready to make the creamy cheesecake.

Next, take out a small mixing bowl and mix the sugar and graham cracker crumbs until combined. Melt the butter in the microwave for 30 seconds, stir and add 10 seconds at a time, mixing until it is a fully melted golden elixir. Then pour the melted butter into the dry ingredients and mix until all the crumbs are moist.

Ready to form the crust? It couldn't be simpler. Take a heaping spoonful of the crumb mix and place it in each muffin cup. Press the crust into the bottom of the muffin liners with the back of a spoon, or use your fingers.

Bake the crusts for the recommended amount of time and remove them from the oven. Then you can reduce the heat in the oven to 300 degrees.

Step 2 | Start With the Apples

Now it is starting to get good… grab your medium mixing bowl and pour in the apple pie filling. Then use a sharp knife to cut all the apple pieces into fine chunks.

Add in the cinnamon and caramel sauce and stir the filling until mixed well.

Step 3 | Whip Up the Cheesecake Layer

Time for the next layer, the cheesecake! Take your stand mixer bowl or a large mixing bowl and your electric beaters and cream the softened cream cheese until it is that fluffy smooth consistency you want. Now, measure in the vanilla extract and sugar. Next, put the eggs in one at a time and beat until they are thoroughly combined and silky smooth.

When your crusts are cooked, the apple pie filling is ready, and the cheesecake batter is done, begin assembling the layers of fluffy good mini cheesecakes.

Place a spoonful of caramel apple filling over each golden crust. Then follow with the cream cheese mixture. You will want each cup to end up filled ¾ of the way full to allow for expansion. Otherwise, you will waste all that good cheesecake pie on the bottom of your oven.

Place the cheesecake-filled muffin tin in the oven and cook as directed on the recipe card. Once they are cooked to perfection, remove them from the oven and cool them completely. Once they reach room temperature, place them in the refrigerator for three hours before you serve them.

How do you tell if a cheesecake is done?

Jiggle the pan a bit and see if the creamy filling looks like jelly. If only a tiny bit in the center wiggles, the size of a quarter or so, the pie is done baking.

Can I make this recipe in a springform pan?

Yes, you can use the same layers in a traditional cheesecake pan. Just follow the cooking instructions in this Classic Cheesecake Recipe.

How do you get mini cheesecakes out of a muffin pan?

Cool the cakes for 30 minutes, and then use a knife to loosen the edges. But if you use paper liners, they will be much easier to remove!

Cover your cakes with foil or plastic wrap or place them in an airtight container to store in the refrigerator. They won't last long, in any case.

If you would like to make these delicious treats ahead of time and place them in the freezer, you can freeze them after they are at room temperature. Then top them before serving. 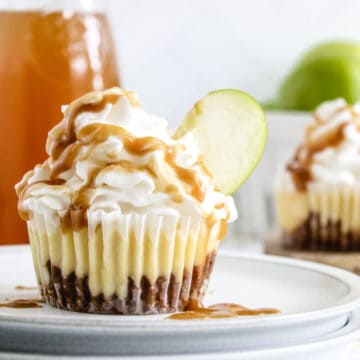 Soulfully Made is not a dietician or nutritionist, and any nutritional information shared is only an estimate. We recommend running the ingredients through an online nutritional calculator if you need to verify any information.

Tried this recipe?Let us know how it was!
« Halloween Chex Mix Recipe
Biscoff Cookie Butter Latte » 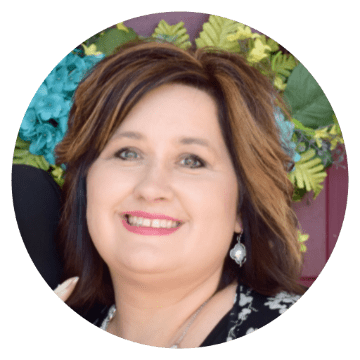